On Monday 9th May we took a trip up to Manchester to The International Photo Booth Convention 2016 hosted by Fred Aldous. The IPBC (IPC) is an ad-hoc event that takes place every few years in different locations across the world, the event was first started in 1997 by a guy called Mr Mixup. 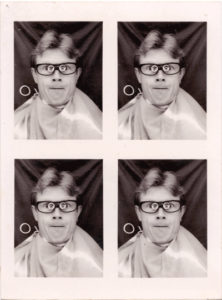 Mixup is a photo booth artist who first fell in love with photo booths at a young age whilst growing up in Nottingham. He and his mates used to fool around in the booths pulling the usual faces and poses, then in his early 20s he started to use photo booths as a medium to create art.  He started making colourful masks, props and backgrounds to turn his photo booth prints into more than just a standard photo booth photos and more and more into pieces of art.

One day in the late 80s Mixup was introduced via a neighbour to a Yugoslavian guy called Sasa Markovic who it turned out was also a photo booth artist.  Understandably the two got on like a house on fire and started to arrange photo booth meetups in the UK and Yugoslavia and then in 1997 Mixup held a days “boothing”at Nottingham Trent University which he then went on to name as the very first International Photobooth Convention. 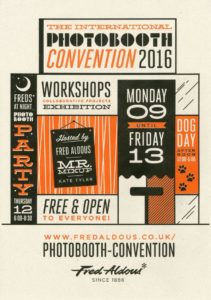 Since ’97 the photo booth convention has been held in London, Brighton, New York City, St Louis, Belgrade, Chicago & Los Angeles. Therefore this year it was the turn for England take the baton once again and Fred Aldous in Manchester hosted.

There were workshops planned all week but sadly we were only able to make it for the first day.  When we arrived we first met Mixup who keenly got us straight into the colour photo booth (a 1986 Photo-Me Model 17C) and had us experimenting with mirrors and plastic tubes as a continuation of his ‘The Tube’ project.

Mixup then introduced us to Kate Tyler another photo booth artist who is also from Nottingham. After a long discussion with Kate and Mixup about photo booths across Europe Kate had us don balaclavas for her hidden identities project. 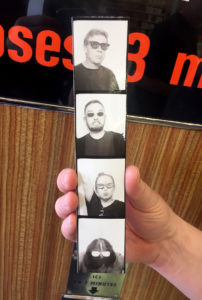 We then wrapped up our afternoon at the convention taking several group photos, one of which you can see below.  A big thank you to Fred Aldous for hosting and everyone who was involved in the organisation of what was a great day!  Can’t wait for next time!